Ross had a good win in court today in Geraldton. His 82 year old client, who fired a .22Z round into the air to scare off nuisance parrots was charged with discharging a firearm to the danger of the public, but was found not guilty of the charge by a Magistrate. The police were also ordered to pay his clients legal costs. The prosecution case relied heavily upon the words of the client during the police interview of him. People need to understand the when the police say that they want to question them, that they should first get legal advice. It is very easy for apparently innocent words spoken in such an interview to be used against the shooter in court.

Ella Valla Station, and shooters generally, had a big win this week in the State Administrative Tribunal. Ella Valla successfully challenged the right of the police to impose onerous and unnecessary conditions on its shooting range. The Tribunal, after long legal argument, accepted that the general nature of the conditions the police wanted to impose exceeded the scope of police power. So the Tribunal "set aside" the police decision to impose those unlawful conditions, and referred the matter back to the police for consideration, but this time to stay within their limited powers (which are much more limited than they thought they were, and which do not really present problem). The Tribunal has invited Ella Valla to make submissions regarding the question of costs. Ella Valla is hopeful that some of the money spent on the case will be recovered from the police.

This is a big win for shooters generally. In my experience police frequently do things which are not permitted by the law. For example, they impose conditions on licences which are beyond their power. Often they search vehicles, people and homes without lawful justification. It is difficult to convince a court or tribunal of this.

This case has ramifications outside shooting ranges. The police have recently been imposing oppressive and unnecessary conditions on shooting ranges in WA. But, now, according to the Tribunal, those conditions are of no legal effect. Indeed, in my opinion, many conditions imposed on firearms licences also are invalid. This case will support my argument.

This court win was the result of a team effort. My legal argument was developed with the immense help of other lawyers, Michael Ryan and Karrie Louden. It could not have happened without the tenacity of Shane Aylmore. Absolutely crucial was the financial support of SSAA (WA) and indivual shooters. Without SSAA this result simply would have been impossible. Ron Bryant, the President, and his team took a risk backing this case. Thankfully it was a winner. Without SSAA life would be much tougher for shooters.

I just had a win in court in a case not involving firearms. The Veterinary Surgeons Board had charged my client with “holding out as willing to practice” as vet when he was not a registered vet. The magistrate accepted that there was no case against my client, who, in fact, is a retired vet who was merely helping a farmer mate on his farm. The Board was ordered to pay my legal fees.

Lindsay Payne, 68 year old farmer of Bullsbrook, WA, suffered injustice today in Midland court. When, one winter’s morning last year, at 4.00am, he saw a car drive to his unoccupied neighbour’s place, which he knew had been burgled before, he thought the same thing was happening again. So he got his old .22 single shot rifle and, from a place about 300 meters away, pointed it away from the car and fired two shots in the air in the hope that the offenders would go away. As it turned out, the car was a police car with two policemen in it. Mr Payne was charged with “possessing a weapon in circumstances likely to cause fear”. The magistrate accepted that Mr Payne fired both shots away from the police, to the danger of no one. But he still found Mr Payne guilty of the charge. I am firmly of the view that the guilty verdict is wrong. It suggests that every kangaroo shooter commits an offence every time he fires a shot that someone hears. Now Mr Payne is in the terrible situation of having to appeal to get justice.

I have just come back from Melbourne, after appearing before the Firearms Appeals Committee of Victoria. The Victorian police had revoked the licence of my client, Chris Shortis, a member of registered political party, Australia First, on the grounds that they did not like the way he was on social media talking about gun laws and other hot political topics. I argued "the words spoken by Mr Shortis are within the sphere of constitutionally protected liberty of political communication recognized and described in the case of Lee versus Commissioner of Police NSW (a NSW case). They do not amount to Mr Shortis expressing any intent to disobey the law, let alone in respect of firearms. Mr Shortis’ words do not go beyond his expression, and advocacy, of his point of view about the incendiary subjects of Islam, immigration policy and history. Crucially, there is no evidence of him having a propensity to cause harm to others with a firearm or to counsel others to do so”.

The Committee readily agreed with my argument and set aside the police decision immediately. This is a good win: an Australian citizen who has a firearms licence has the same right to free speech as every other Australian.

The Supreme Court of WA just gave back to my client his firearms licence. He had been charged by the police with a minor failure to store ammunition properly offence. Because the charge was so minor he pleaded guilty on the reverse of the summons and posted it back to the court, expecting to be told later that he got a small fine. Instead the police came around and wanted his guns because the magistrate had disqualified him from holding a firearms licence - for life! I quickly lodged an appeal to the Supreme Court. The judge agreed the punishment was ‘manifestly excessive’. She accepted the fines and forfeiture of the ammunition were an adequate penalty. She saw no need to impose any period of licence disqualification. The lesson from this story is when you don’t appear in court personally you take a risk. If you, or your lawyer, are not there to give your side of the story, your interests are easily ignored, and, if the case goes badly, it is more expensive and harder to fix the problem afterwards.

A WILLIAMS farmer and his lawyer have warned other farmers to watch what they say to Department of Agriculture and Food (DAFWA) inspectors after an attempted animal welfare prosecution was thrown out of the Narrogin Magistrates Court last Thursday.

DAFWA's livestock compliance unit took 22 months to bring its case against Robert Rose, 30, a third-generation farmer at Grassvale, between Williams and Darkan, to trial but Magistrate Tania Watt ruled there was no case to answer and acquitted him.

Mr Rose was charged with not taking reasonable steps to euthanase a Merino hogget with a broken hind leg or seek veterinary treatment to prevent the animal suffering after he treated it himself but then accidently sent it to Hillside abattoir at Narrogin early one Sunday in May 2013.

Under cross-examination by lawyer Ross Williamson for Mr Rose, veterinarian John Brighton, who was called to give evidence by the prosecution, admitted it was not necessary to hard-splint a broken sheep's leg and that the aim was to immobilise the ends of the broken bone so they would knit back together.

In a recorded interview with two DAFWA livestock compliance officers some months after the sheep went to the abattoir, and presented as evidence last week, Mr Rose acknowledged that he did not use a hard splint, but immobilised the broken leg by bandaging it firmly with tape, a treatment he had successfully used a number of times previously.

This week, Mr Rose said the lesson he had learned from the experience, and one he hoped other farmers would pick up was "be very careful what you say if you are being interviewed (by DAFWA livestock compliance officers)."

"We didn't realise we were going to be prosecuted, we just thought they were trying to clear things up so we answered all their questions," Mr Rose said.

"I wouldn't do that again unless I had a lawyer present."

He and his father, also Robert but known as Bob and a former local shire councillor, run 5000 ewes on 2000 hectares.

Paul Da Silva (my client) had a win in Manjimup court yesterday. The police had charged him with failing to use gun storage facilities, but I advised him to fight it. He had the guns with him in a derelict farm cottage he and mates were camped in during a hunting trip. I said in this situation there was no legal duty to use storage facilities. When I told the charging officer that my client would plead not guilty he ridiculed me. Just before the start of the trial, however, the police prosecutor conceded that he could not possibly succeed. He told the magistrate that he would drop the charge and agreed to an order that the police pay my client’s legal costs. Frequently I see police officers charging shooters with gun storage charges with no good reason. I also hear of the shooters pleading guilty to the charges because they don’t get proper legal advice. They end up with a criminal record when they have done nothing wrong. 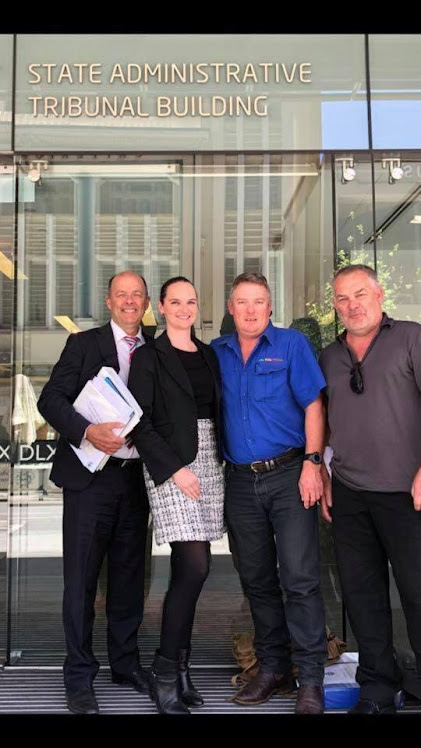 Ross had a good win in court today in Geraldton. His 82 year old client, who fired a .22Z round into the air to scare off nuisance parrots was charged with discharging a firearm to the danger of the public, but was found not guilty of the charge by a Magistrate. The police were also ordered to pay his clients legal costs. The prosecution case relied heavily upon the words of the client during the police interview of him. People need to understand the when the police say that they want to question them, that they should first get legal advice. It is very easy for apparently innocent words spoken in such an interview to be used against the shooter in court.